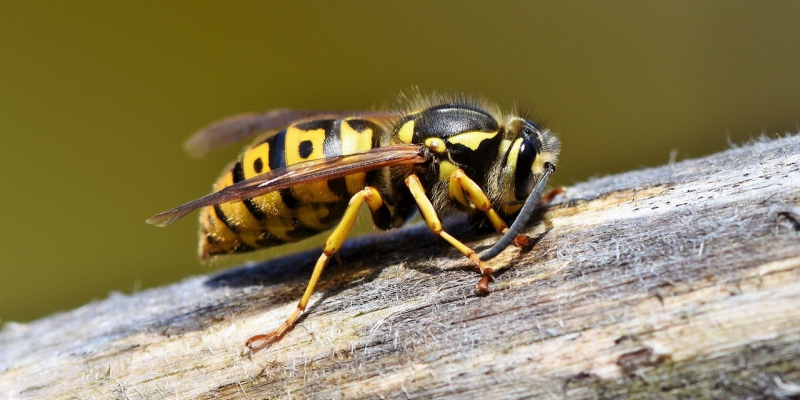 Thankfully, not everything is bigger in Texas, including wasps, yellow jackets, and other stinging insects. That said, these pests are big enough on average to still cause problems in your home and yard. The first step to figuring out how best to get rid of a wasp’s nest or cloud of hornets is to identify what kind of stinging insect you’re dealing with. In this blog post, we’ll go over several types of wasps commonly found in Texas.

Types of Wasps in Texas:

Identification: Slender and black with wings folded lengthwise when at rest
Size: ¾ inch to 1 inch long
Behavior: They hide in cracks and crevices during the winter, then build nests in the spring out of bits of wood. They lay eggs individually in open (uncovered) cells. Most of the colony dies out at the end of summer, except for the queen who prepares for winter.
Prevention: Spray wasp protection sprays on threatened areas, hang up a decoy wasp’s nest, avoid leaving food out.

Identification: Look similar to bumble bees with slimmer bodies and less hair.
Size: ⅓ inch to ⅔ inch long
Behavior: They build large nests out of paper and saliva, which house hundreds of cells and hundreds to thousands of other yellow jackets. They’ll eat many other insects, as well as garbage and leftover food.
Prevention: Keep trash cans clean and sealed, don’t leave food out.

Identification: Mostly black with a white face (hence the name), but looks similar to a yellow jacket.
Size: ½ inch to ⅝ inch long
Behavior: They build a nest suspended above the ground, often in trees, which are grayish and cone-like but enclosed. They usually eat nectar from flowers but will sometimes feed on other insects.
Prevention: Don’t leave food out, keep trash cans clean and sealed, keep flowers and gardens a good distance from your home.

Identification: Black or dark brown with colorful yellow abdomen markings. Amber-colored wings. Notable for their large size.
Size: Approximately 2 inches long
Behavior: They build nests underground, frequently under roadsides, sidewalks, and embankments, but also burrow frequently in lawns. They prey mainly on cicadas, and females will kill several cicadas to stash their corpses in cells of the nest alongside eggs, to provide a food source for the growing larvae.
Prevention: When you see burrows from cicada killer wasps, try drenching the areas with lots of water. Keep a healthy, lush lawn to avoid giving them anything to burrow into.

Identification: Shiny black or blue-black with slender abdomens.
Size: About 1 inch
Behavior: Because they are solitary (not social) wasps, the queens care for their young directly in a single nest. They are not aggressive and rarely sting humans. They build finger-like nests out of mud, usually inside sheds or barns.
Prevention: Frequently check sheds and barns for nests. Keep plants and gardens a good distance from the home.

Identification: Dull black with gray or dusky-colored wings.
Size: ½ to ⅝ inches long
Behavior: Known for catching and feeding crickets to its offspring. They often appear indoors, most commonly in late summer and fall. Similar to cicada killers, the females kill crickets and then lay eggs near the corpses so that the hatchling wasps will have food when they awaken.
Prevention: Seal any outside openings in your home as well as inside gaps and cracks. Fill any holes or burrows in lawns.

How To Prevent Wasps and Stinging Insects In Texas:

There are multiple steps you can take to prevent wasps and stinging insects from nesting near or in your home.

Here are some ways you can do so:

If you follow these tips, you’ll maximize your chances of avoiding a wasp infestation.

A wasp’s nest can look different depending on the type of wasp or yellow jacket. Many are cone-shaped and papery (since many types of wasps build their nests out of wood pulp and saliva). Some have exposed cells, looking similar to a honeycomb. Often they are hung from above in trees or rafters, or in spaces such as attics or crawl spaces or sheds. Some types of wasps and yellow jackets burrow underground, which may be difficult to spot except for a hole in your lawn.

What’s The Difference Between A Hornet And A Wasp?:

Both wasps and hornets can be aggressive and sting more than once (unlike bees). Hornets and wasps can have different life cycles and look slightly different (hornets with wider heads and more rounded abdomens). Hornets are always social (living in colonies), while wasps can either be social or solitary. Wasps are known for being parasitic, or laying their eggs on the bodies of other organisms (often dead bodies, so that the offspring will have food to eat once they hatch).

Wasps often see your movement as threatening--so when you see a wasp and understandably want to run away, that only makes the wasp more likely to chase and sting you. Wasps usually get aggressive when trying to protect their nests, which is why they’ll go after what they see as attackers. Though it’s counterintuitive, the best tactic when coming in contact with a wasp is to stay very still. If you do need to run, it’s best to do so in a straight line--wasps shouldn’t chase you more than 100 feet or so, as they are still mainly trying to protect their nest, not get far away from it.

Get A Free Quote!

Sign up for one of our recurring pest control plans and get a FREE mosquito treatment valued at over $125. *New customers only.