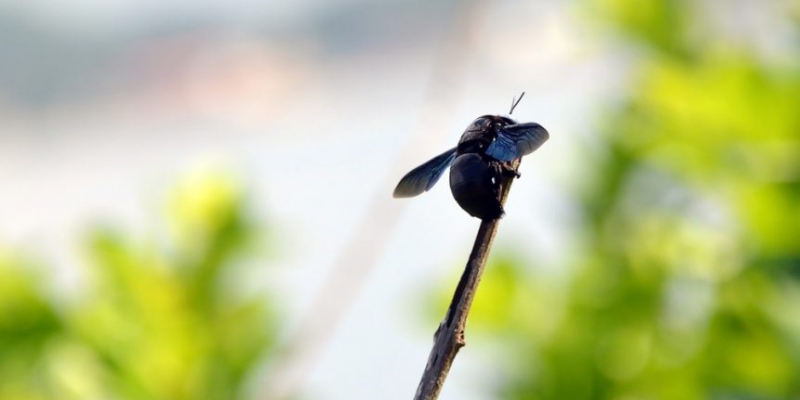 When you think of pests that live in wood, you probably think of termites, but there are many others. One species of bee, the carpenter bee, may be causing significant damage to your home before you even notice a problem.

What Are Black Carpenter Bees?

Carpenter bees are considered solitary bees, which means they tend to live in small nests without a strict social structure or division of labor. However, this does not mean that they live totally alone. Females often live in small groups, and carpenter bees also tend to like to nest near others. This leads to growing infestations as more generations build nests in the same area.

Where Do Black Carpenter Bees Live?

Carpenter bees get their name from their preferred nesting area. They like to dig tunnels in wood, particularly weathered and exposed wood. A single black carpenter bee’s nest can be six to ten inches long, so they often cause expensive cosmetic damage to decks, wooden siding, and more.

Black carpenter bees have a wide range, but they are particularly prevalent in southern and southwestern states. This includes most of Texas, including Houston and the surrounding areas.

When Are Black Carpenter Bees Active?

Black carpenter bees tend to be most active during the spring and summer months. April and May are particularly noticeable times, as that is when new adult bees move out of their brood cells and begin to establish their own nests. Males may continue to be obvious throughout the summer due to their tendency to chase flying insects, animals, and people away from their nests, but otherwise their behavior is mostly limited to pollination. They typically become inactive during winter months.